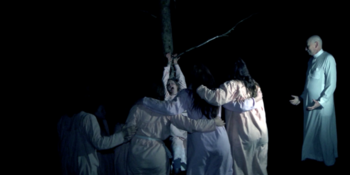 Red Mage: I have a question. At any given point in history, there are doomsday cults. Such as yourselves. For a thousand years, your kind has striven for and preached an end of times that will never be.
Cultist: Your question?
Red Mage: My question is: What's it like to be as stupid as you are ugly?
— 8-Bit Theater, #739

A dark take on the Cult, an apocalypse or doomsday cult tends to crop up in fiction wherever Cosmic Horror Story elements are present, with the members actively seeking to bring about The End of the World as We Know It. There are several flavors of apocalypse cults, but most seek to awaken or make possible the return of some god of destruction to destroy the world and "make it anew". Others seek to end their own lives to escape what they believe is the end of the world or to have a better afterlife.

They will often be seen conducting arcane rituals of untold horrors and believe they will be rewarded with the equivalent of paradise for their service (they may be mistaken). As they are often a form of Religion of Evil, they tend to be practitioners of The Dark Arts. Human sacrifices, necromancers, zombies, and other forms of undead are optional but often seen among their ranks.

Unfortunately, some such groups have existed in Real Life. Documented ones include:

No real-life examples are allowed here because of the high standard of proof that such a group has to have to be considered such in Real Life (note that all of the above groups include extensively documented murders/suicides done with the apocalyptic religion as a sole motive. Also note that none of the groups above exist anymore, enough that documentary journalism, investigations by authorities, and other objective proof has entered the record regarding them) and that the definition is maddeningly subjective in the absence of such ironclad proof.