Series / You, Me and the Apocalypse 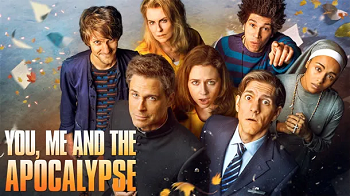 "See that [the comet]? 'That's what's going to kill everyone. Any second now. It doesn't matter who you are, who you pray to, black or white, straight or gay, rich or poor. Yeah, it's Judgment Day! The actual apocalypse! And where am I? In Slough. Or rather, under Slough, watching it on telly."
— Opening narration
Advertisement:

You, Me and the Apocalypse is a comedy drama, co-funded by Sky and NBC.

A comet, 8 miles wide, is about to collide with Earth, wiping out all life. In a bunker under Slough, Berkshire, UK, ex-bank manager Jamie watches the events live on television — along with various other characters, from all over the world. The series explores who they are and how they came to be in Slough, following their lives from 34 days before the impact when news of the comet was first announced.

In Slough, Jamie (Mathew Baynton) is in a rut. On his birthday, the seventh since his wife Layla (Karla Crome) went missing, he is arrested by the police and accused of cyber-terrorism. He is given a photo, taken in Moscow, of Layla and... himself! Upon discovering from his mum Paula that he is adopted and may have a twin brother, he sets out to find Layla as the world goes to hell.

In New Mexico, librarian Rhonda McNeil (Jenna Fischer) is in jail, accused of hacking into the NSA. She is actually covering for the real hacker, her teenage son Spike (Fabian McCallum). On the day of Jamie's birthday, she and fellow prisoner Leanne (Megan Mullally), a white supremacist, are broken out of jail by a group called "Deus Ex Machina", led by Ariel, a man who looks suspiciously like Jamie...

In the Vatican, Sister Celine (Gaia Scodellaro) leaves her convent for a job interview with Father Jude (Rob Lowe), a foul mouthed, chain-smoking Vatican priest assigned to the recently reopened office of Devil's Advocate, tasked with confirming miracles and running background checks on potential saints. The two are tasked with investigating the Second Coming of Christ by the Church as the comet approaches.

Over the next 34 days, their lives will interact as they head for their final destination — Slough.