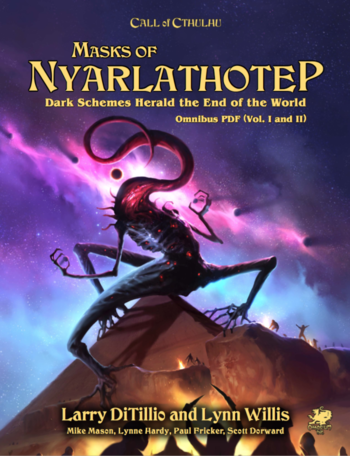 A race to save the world.

Masks of Nyarlathotep is a campaign for Call of Cthulhu and one of the most famous adventure modules of all time. The original campaign was published by Chaosium in 1984 and it has remained in more or less continuous publication ever since.

The premise is the player characters are friends with True Crime (specifically, cults) author Jackson Ellias, who contacts them one night about a terrifying threat to his life as well as the world as a whole. This kicks off a globe-trotting campaign that visits New York, London, Cairo, Kenya, Australia, and China. A number of Nyarlathotep-worshiping cults are trying to bring about The End of the World as We Know It and it's up to the player characters to stop it. The campaign, like most Call of Cthulhu campaigns, was set during the 1920s (1926 to be precise) and had a Pulp action sensibility.

The campaign has been revised and re-released multiple times with the addition of Australia (originally cut from the module) and later a 600-page 7th Edition. Yogsothoth.com made the Masks of Nyarlathotep Companion which was a 700-page supplement to the module full of local color. The 7th Edition release incorporated many elements from the MoN Companion and also updated the book with more people of color, women, and details regarding the time period's cultures.

The game was infamous for being a complete meat grinder that had the potential to and often did kill whole groups of player characters. In a game usually defined by slow methodical investigation and individual horrors, it had the player characters encounter dozens of crazed cultists and numerous monsters. The 7th edition would tone some of the game's lethality down and provide options for the Pulp Cthulhu variant rules.

The H.P. Lovecraft Historical Society has adapted the module into a 6-hour episode of their Dark Adventure Radio Theater audio drama series (done in the style of radio serials such as The Shadow) and presents a group of clueless American heroes trying to save the world.

The Campaign
The Radio Play