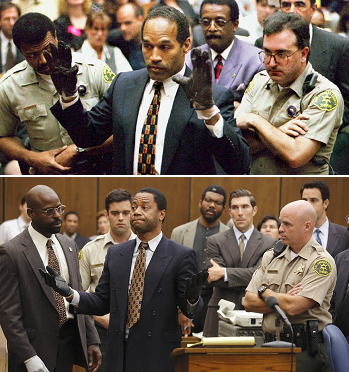 Some shows focus on real crimes rather than fictional ones. This isn't the same as Ripped from the Headlines, where the show creates a fictional counterpart to a real crime, complete with new fictional people to be part of it. True Crime shows aim to dramatize an event (more-or-less) exactly, with names only changed if the victims or their families request it.

There are at least two distinct types of these shows:

Both types make use of Crime Reconstruction. Within both types, broadcast-network offerings tend to be made by the news division. They're what hourlong Prime Time news shows often decay into; true investigative journalism costs serious money and carries the risks of speaking truth to power while True Crime retrospectives are just about the cheapest thing you can put out and still call "news programming".

The term is also used for Non-Fiction novels of varying quality, covering Real Life crimes. On one side you have novels written to cover the events as clearly and factually as possible, and then there are works thrown together for quick and easy public consumption, often advertising things like "10 pages of shocking photographs!" on the cover.

Should not be confused with the entirely fictional video game.

Examples of "Calls for Aid":