Literature / The Shadow Out of Time 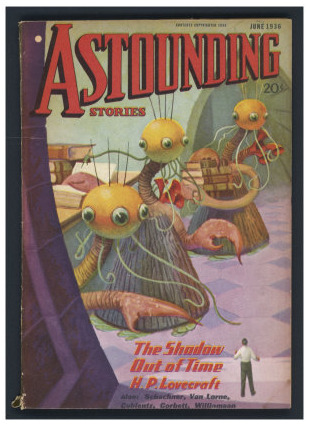 The Shadow Out of Time is a 1936 novella by H. P. Lovecraft serialized in Astounding Stories magazine. It centers around a university professor who has been having very vivid and unusual nightmares and has become alienated from his family and peers because of his strange behavior between 1908 and 1913, of which he has little memories. Searching for an answer, he finds that cases identical to his have occurred throughout human history. As his dreams become longer and more detailed, he witnesses an ancient civilization millions of years old, and discovers that his mind was transferred into that of an alien for five years and that for five years an alien creature lived within his body, but he must set out to discover proof for anyone to believe him.

It has been adapted into a radio drama for the Dark Adventure Radio Theatre series and twice as a Comic-Book Adaptation, once by I.N.J. Culbard and again by Matt Howarth in Graphic Classics: H.P. Lovecraft. Elements of the story were also present in the video game Call of Cthulhu: Dark Corners of the Earth.