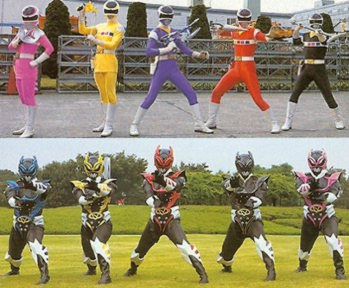 One team is the Trope Namer. The other is the original. Guess which is which.
"You've heard of the Dream Team? Well, we're the Mean Team, wussy man!"
— Pound, Space Jam
Advertisement:

A regular Legion of Doom has members which oppose the heroes and are often their archrivals, but their powers are scattered all over the place, and they're not necessarily Evil Counterparts even if they have the same number of members.

The Psycho Rangers are the collective Evil Twin of The Team. Each one's nature/powers mirror a specific hero and they work together as a group. The same way The Hero can get his True Companions together to fight the Monster of the Week, sometimes the Big Bad, The Rival, Evil Twin, Monster of the Week or Evil Counterpart can get himself a team made up entirely of Evil Counterparts to the main cast.

If they know all the moves of their heroic counterparts, the Psycho Rangers may be too strong for their duplicates one-on-one. The heroes can sometimes turn the tables by switching opponents and fighting each others' evil doubles. Without knowledge of the heroes' fighting techniques, the Psycho Rangers become much easier to defeat. (Unless they promptly switch back again.)

If they are less straight up evil and more along the lines of merely "opposing the heroes", it is not unlikely that if there is a gender flip Evil Counterpart, then there might be some sexual tension between the two.

The most extreme, but not the most common, type of Psycho Rangers are literally evil clones or Mirror Universe counterparts of the heroes.

Contrast Mirroring Factions. May to various extents also be a Similar Squad. Can be part of a Geodesic Cast. Usually turns out to be an Evil Knockoff team. May lead to Counterpart Combat Coordination. The heroes and the Psycho Rangers are often shown in a Mirrored Confrontation Shot. For a team like this minus the evil, it's Anti-Hero Team.

open/close all folders
Trope Namer: Power Rangers and Super Sentai
Super Sentai and Power Rangers are both fond of this very trope. More often than not the evil counterparts are usually one-off clones created by the villains that are quickly disposed by the end of the episode, but a few shows have actually featured their own recurring evil Ranger team to antagonize the heroes.
Audio Drama
Fan Works
Films — Animation
Films — Live-Action
Literature
Live-Action TV
Professional Wrestling
Theatre
Toys
Webcomics
Web Original
Feedback