Tabletop Game / Spirit of the Century 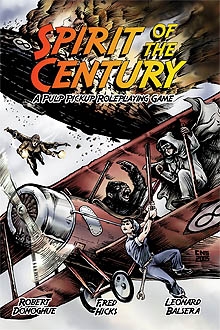 Gorrillas, Biplanes, and Derring-Do!
The deadly Doctor Methuselah seeks to unravel time itself with his solution to the Eternity Equations. Gorilla Khan stalks darkest Africa from conquered Atlantis. Mad scientists, strange sorcerors, and power-hungry dictators all seek to undo the fate of humanity. It's the final century of the second millennium and you are our last hope!
— The back cover of the SotC rulebook
Advertisement:

Spirit of the Century is a role-playing game of pulp-era adventure using the Fate system (originally a spinoff of the FUDGE rules...with which, ironically enough, it already had little more in common than the dice by the time SotC came out, and which it would eventually outstrip commercially by a fair margin). Characters are described by their skills, their stunts and their aspects, with the latter being essentially being freeform bits of description considered important enough to have a mechanical impact via the fate point rules — a character could literally have an aspect like "Nice Hat" and spend fate points to invoke that for appropriate bonuses (or conversely have it compelled to get into trouble over for bonus fate points). The game is designed as a "pick up game", features open-ended character creation and is fairly rules light. It also allows a large degree of player involvement in shaping the story - both through creating aspects which define the game background and spending their fate points to make declarations about the world around them.

The year is 1922. Aircraft are beginning to fill the skies. Electricity, radio, and the internal combustion engine are transforming the world. The War to End All Wars is in the past and the future is full of amazing possibilities. In the hidden corners of the world lie strange artifacts with astounding abilities; perhaps remnants of legendary Atlantis or Mu. Unfortunately there also lurk sinister forces who would use these scientific advances and strange antiquities to further their own destructive agendas. This is where the Centurions come in.

The Century Club is, on its surface, a social club whose charter is one of philanthropy and the promotion of arts and sciences. Its members are a cross section of humanity's most talented and influential people. Some of those among the Century Club are truly special however. These Centurions, each born on the first day of the first year of the new century, are individuals of extraordinary ability. These amazing people use their talents to guide the world away from darkness and to shape a brighter future.

Tropes Used In the Game:

Tropes Used In the Setting:

Tropes Invoked or Used by Stunts: