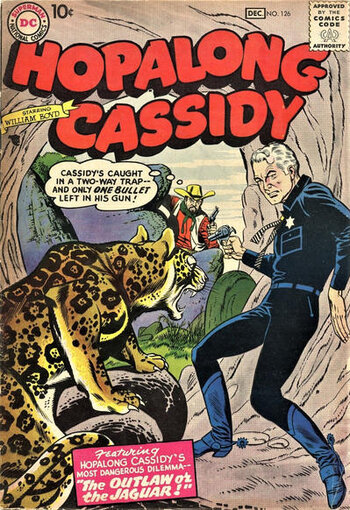 "In a man to man fight, the winner is he who has one more round in his magazine."
— Erwin Rommelnote after coming out on the losing end of this trope in France in 1914
Advertisement:

The hero has entered the enemy base. He has killed mooks, blown stuff up, and said one liners. This is it. The final showdown. Hero vs. Big Bad. Mr Villain says, "It's too late! The files have already been transferred!" as he holds the heroine close, threatening to kill the Damsel in Distress. She cries out to her beloved hero. The hero gathers his resolves and checks his pistol's magazine. He only has one bullet left.

Wait, what? One bullet left?

This trope is named after the uncanny attempt at drama of giving the hero only a single chance to win the battle, i.e. one bullet left. You can be sure of it, you can count on it, you could bet money on it if anyone would actually take that bet. That shot is going to hit its target. It may have been actually suspenseful at some point, but by now everyone has seen this one done and done again.

May happen during a Darkened Building Shootout.

See Also: Bottomless Magazines & Counting Bullets. If there is more than one target for said bullet, both of them critical, that's under Sadistic Choice or Friend or Idol Decision. Not to be confused with leaving someone a pistol with a single round remaining, and the implications thereof.