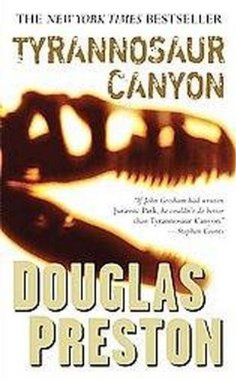 Tyrannosaur Canyon is a paleontology-based thriller by Douglas Preston first published in 2005.
Advertisement:

Among the canyons of New Mexico, professional fossil hunter Stem Weathers is murdered. With his dying breath he gifts a notebook to a passerby, sending him to Weather's estranged daughter with a message. Frustrated, a shadowy assassin turns his attention to the new bearer of the precious notebook that documents the greatest paleontological find in Earth's history.