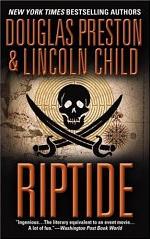 Watch your step
Riptide is an 1998 adventure novel by Douglas Preston and Lincoln Child inspired by the real-life Oak Island Money Pit; a possible buried treasure horde off the coast of Nova Scotia that has resisted two hundred years of excavation attempts through lethally dangerous floods and cave-ins.
Advertisement:

Set off the coast of Stormhaven, Maine and targeting the fictional Ragged Island Water Pit, the novel focuses on Dr. Malin Hatch, whose family has owned the seemingly worthless island for several generations after his grandfather became the latest in a centuries-long line of treasure hunters to bankrupt themselves attempting, and failing, to recover its now-legendary hoard.

The novel begins in 1971 when a seven-year-old Hatch is traumatized by an unsupervised trip he and his twelve-year-old brother Johnny take to the island while their parents are away, involving a venture into a freshly exposed secret tunnel and the horrors it leads to. The rest of the book takes place twenty-five years later as the adult Hatch is approached by the weathered "recovery specialist"(professional treasure hunter) Captain Neidelman. With a fleet of ships, cutting-edge technology and twenty million dollars in capital, the captain is invested in recovering the 400-year-old treasure once and for all. Nearly half the profit will be Hatch's.... if he can face the nightmares of his childhood long enough to claim it.

There is more to worry about than tragic memories however, as the expedition unfolds and they discover the dark secrets of the Water Pit's designer(an Renaissance architect with a penchant for genius codes, imprisoned by the gruesome pirate who stole the treasure horde in the first place) and encounter disturbing historical references to "St. Michael's Sword", a mysterious artifact cursed with the power to "kill anyone who looks at it"....

Not to be confused with the 1960s Australian TV series or the 1980s American TV series.