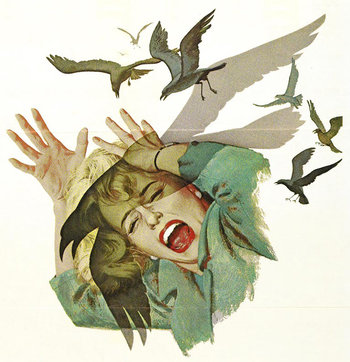 Nature re-establishes the pecking order.
"Birds [...] are the last of the dinosaurs. Tiny velociraptors with wings. Devouring defenseless wiggly things and, and nuts, and fish, and, and other birds. They get the early worms. And have you ever watched a chicken eat? They may look innocent, but birds are, well, they're vicious."
— Spider, Anansi Boys, by Neil Gaiman
Advertisement:

Everybody knows that birds are some of the least scary animals ever, right? After all, they're small, they're pretty, they sing, they have sharp talons and pointy beaks, they fly around in huge flocks, they hang out in battlefields and pick the flesh off of the corpses...

In short, they're not always a welcome staple.

Monstrous birds aren't that ridiculous, if you think about it. After all, they're the dinosaurs that survived. As mentioned above, even the cutest birds have pointy beaks and talons, and some birds (such as starlings) fly in flocks of thousands, making them seem like hordes of avian locusts. Many of them are voracious predators, and airborne to boot—just imagine if birds of prey were big enough to swoop down on humans and carry them off. (It might be worth noting that the extinct Haast's eagle could have occasionally preyed on humans, although it wouldn't have been able to carry them.) One should not forget the terror birds

, flightless predatory birds up to three meters tall that once roamed South America.

Feathered fiends can be divided into four categories:

This trope isn't limited to actual birds either—creatures that at least somewhat resemble birds work just as well. Examples of such creatures include Feathered Dragons, Feathered Serpents, Cockatrices, and dinosaurs, many of which are now known to have had feathers.

Bird-Poop Gag is a related trope, but instead of being threatening and dangerous like this trope as, that's where the birds (usually pigeons, but other flying birds like crows will do) defecate to ruin the characters as a Running Gag.

See also Balloon-Bursting Bird, Giant Flyer, Killer Rabbit and Swans A-Swimming. Contrast with Noble Bird of Prey. Compare with Bat Out of Hell and Reptiles Are Abhorrent. Brutal Bird of Prey, Kidnapping Bird of Prey, Ominous Owl, Vile Vulture, Foul Waterfowl, and Creepy Crows are subtropes. Related to Giant Flyer. Possibly one of the reasons why Everything's Better with Penguins. Contrast with Goofy Feathered Dinosaur (unlike this trope, generally applied only to non-avian dinosaurs).

Nigel, the evil, sadistic cockatoo from Rio. He's a Card-Carrying Villain who almost name-drops this trope when he refers to himself as a "feathery freak with a beak, a bird murderer" in his Villain Song as shown in this scene.

Nigel, the evil, sadistic cockatoo from Rio. He's a Card-Carrying Villain who almost name-drops this trope when he refers to himself as a "feathery freak with a beak, a bird murderer" in his Villain Song as shown in this scene.