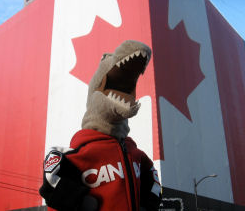 "I may only have a brain the size of a peanut... wait what was I saying again?"
— Traumador the Tyrannosaur
Advertisement:

is a blog written by Traumador the Tyrannosaur about his many exploits.

Traumador is a tyrannosaurid who hatched from an egg that magically survived the K/Pg Extinction Event and was discovered in Alberta by Craig, an aspiring paleontologist (and the mastermind behind the blog in real life). He eventually gets a job

at the Royal Tyrrell Museum and things get interesting from there. His attempts to fit in with modern society and get along with humans as well as fellow living dinosaurs (known as Vivus specimens) have landed him in many adventures over the years in several parts of the globe, some of them mysteriously dangerous…

Unfortunately, it is now on official hiatus due to Craig deciding to focus on his other projects for the time being.