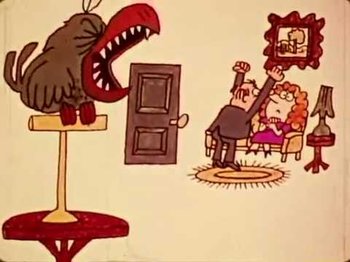 The Crunch Bird is a 1971 animated short film by Ted Petok.

A woman looks for a birthday present for her ill-tempered husband. She decides on a pet, but passes up conventional pets in order to get a "crunch bird". The crunch bird is a rather intimidating bird with large teeth that will, on command, chew anything to bits. She brings it home to her husband, with unexpected results.

The Crunch Bird is only two minutes long, short even for an animated cartoon. It won the Academy Award for Best Animated Short Film, making it the shortest film to win an Oscar of any kind alongside the first American animated short not from NY or California (the short was made in Michigan). note  If you're wondering, the shortest Oscar nominated film is Fresh Guacamole, and the longest Oscar winning film is the documentary O.J.: Made in America.