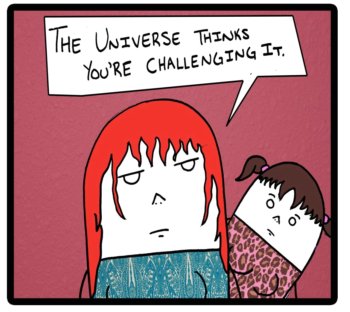 Elly and the reason she never says "It could always be worse."
Sam: When exactly did we stop pursuing happiness and start avoiding unhappiness?
John: Probably the minute we entered our early 20s.
Advertisement:

(sometimes called The Word Weary Comic) is a Stick-Figure Comic webcomic about disappointment, loneliness and love

centered around John Kossler, an Author Avatar, and his friends.

The author, John Kossler, makes light of his depression and his position as the omega male in his group of friends. When the comic begins, the audience is introduced to Yorick Kingsley, a performance artist who is somewhat mean to John, Jason Kirkwood, a hard drinking misogynist philosopher and the only member of the group who was in a relationship when the comic started, and Sam Kirkwood, Jason's younger brother and the voice of reason in the group. Soon the characters meet Harry the Hipster and his girlfriend, Elly, an independent Fiery Redhead, to whom John finds himself instantly attracted. Later introduced are Lillith, a girl who plays Dungeons and Dragons and thinks Nerds Are Sexy, her friend, Grace, who prefers being alone to having to deal with immaturity (while still deeply wanting to love and be loved), and Lillith's socially awkward stalker, Nick Trotmann (who's ALSO implied to be an Author Avatar).

The comic is heavily Slice of Life (almost to the point of being a Journal Comic) and much of the humor comes from the friction between the character's personalities. Kossler makes use of puns, Black Comedy, sarcasm and the occasional Bottom of the Barrel Joke. Strewn throughout are Wham Episodes in which all pretense of humor is dropped and the emotions of the characters are explored... but these are pretty rare.

The Word Weary is notable for its tight narrative (issues #4-#79 comprise one day in Webcomic Time) and attention to continuity while maintaining the humor. Kossler has also mentioned numerous times that he tries to make the female characters in the comic as realistic and relatable as possible- while still featuring misogynistic male characters. The comic updates on the 10th, 20th and 30th of each month at 6:00pm Eastern US time.