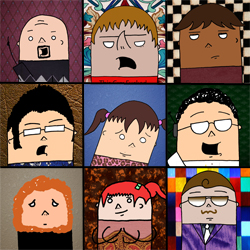 The main characters of The Word Weary showing off their diversity. From left to right: John, Yorick, Grace, Jason, Lillith, Sam, Poor Trotmann, Elly and Harry the Hipster.
Advertisement:

The official character page can be found here.

, John is one of the comic's central characters, based primarily on the author and artist of the work. John is relaxed and easy-going with a self-deprecating sense of humor. He wishes for a girlfriend but is so overcome with anxiety at the thought of asking a woman out that he doesn't really bother.

"Ladies and gentlemen, the performance has come to close. I imagine many of you are upset about the things you saw tonight. Others by my liberal use of monkey blood. These feelings are natural and expected... This is the goal of the performance artist."

Grace: "It makes sense. Wait until you know he digs you and then attack so he never sees you coming."
Lillith:"Considering how long it's been since my strategy worked, no one's seen me come in a while."

"Why do you hate me?"
Poor Trotmann to his alarm clock after being awoken from a particularly nice dream.

"It's so surreal. You wake up and find out you're not who you thought you were."

Morris: "You're pretty much the Gestapo of Upstate New York, Harry."

Harry: "You kinda ruined my childhood there, Mayor."
The Mayor: "Yeah, well, you ruined your mother's figure, so you know... Even Steven."'''