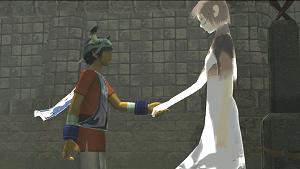 Now don't let go for the rest of the game.
"Oh yeah, I'll tell you something,
I think you'll understand
When I say that something:
I wanna hold your hand!"
— The Beatles, "I Want To Hold Your Hand"
Advertisement:

Holding hands is one of the most basic, platonic, and visible ways to express affection, friendship, or love.

Because holding hands can be platonic, it can be shown in any work, between any people. If someone offers a hand to hold, and the person it was offered to rejects it, odds are something is wrong with at least one of them. Sometimes one tries to hold the other's hand, and the other whips their hand away with The Look.

When holding hands is shown between people who can reasonably be eventually romantically linked, it is often either symbolic of the link or a prelude to it, depending on the rating of the work. Even if it isn't, it likely will be in the Fan Fic due to shipping. Romantic hand-holding may be accompanied by giggling from one or both of the people.

Holding hands can be a gesture of solidarity. When a group of people join hands in a circle, that can mean friendship, dancing, or (in some works) a magic ritual.

It's also distinctly Truth in Television, especially the romantic version.

Compare/contrast Take My Hand! and I Kiss Your Hand. Intertwined Fingers is a subtrope.