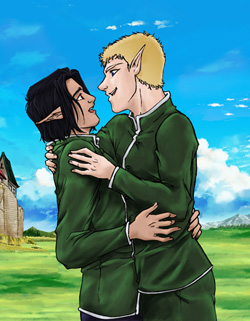 Heterosexual men doing heterosexual things.
Outlander Leander is a series of young-adult novels by Eisah. It's written in the first person POV and follows the main character, Leander, as he tries to become a famous treasure hunter. Though it technically falls into the sci-fi genre, the setting can easily be mistaken for a fantasy novel with the way it reads and looks.
Advertisement:

The first book in the series, Flute of the Wind Queen, shows Leander dipping his toes into his first adventure after his father is deployed. He meets Ellora while searching for a flute left behind by the Wind Queen. She wanted to find the flute as well, but she has slightly better connections. From there he gets sucked into the black market, where information isn't censored and rumors about treasure can be passed around freely.

There he finds out the flute was probably stolen by enemy soldiers who attacked their country a year prior. Leander lives in the country of Nagdecht, which shares a border with Geuran, run by a hostile dictatorship.

Leander travels to Geuran and meets the lackluster Geuranian soldier, Deckard. He finds himself in a position where he's forced to rely on Deckard, and in their time together he discovers Geuran is different from what he's been taught to believe. 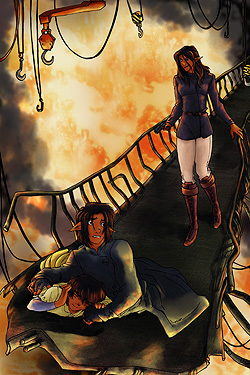 A typical Liddenday afternoon.
The second book in the series, Coronation Necklace, follows Leander's adventure a year later. Ellora finds out that some stolen royal jewelry is in the possession of a gang of counterfeiters. Their leader has recently died, and the gang is currently fighting over who their new leader will be - her daughter or her right-hand man. Ellora's plan is for Leander to take the necklace and leave without anyone knowing he was there, allowing the two factions of the gang to blame each other.

She also sets Leander up to escort a young man named Valli as a cover story for why he's traveling north. Valli is a dancer at the theater and a friend of Ellora's, and he's going north anyway in order to get surgery.

Things take a drastic change for the worse when Leander first spies on the gang. He quickly discovers these black marketeers aren't petty criminals. They have ruthless hitmen, commit arson for revenge and kidnap innocent people. Not wanting to get involved with murderers over a necklace, Leander is ready to throw in the towel except for one thing: He's flubbed and now Valli is missing.

Leander is forced to pursue the gang in order to try and find Valli, his only hope for help being one of the most frightening men in the entire country: General Glaive, the leader of the Naggian army and suspected sadist.

A small novella, called Beneath the Curtains

, which takes place between volume 2 and 3, was released in November of 2014. It was posted for free online as part of a contest. The story revolves around Leander, Ellora and Valli. They discovered a body at the theater Ellora and Valli work at, and Leander stayed with Valli in order to help keep him safe and help find the murderer. Many more of the theater's residents are introduced in this story for the first time - often as murder suspects.

In the next volume, The General's Bust, Leander travels to the country of Rhodaren for the first time, in order to find the remains of an ancient Naggian statue. His people have little contact with Rhodarens because of their geography, and he has to learn how to survive in their severe weather while trying to figure out how to navigate their country. As it turns out, their people aren't quite the same as he's read in books.