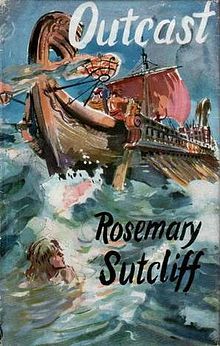 Rum, sodomy, and the lash* (*Rum and sodomy not guaranteed)
"I was not born to be drowned."
Advertisement:

Outcast is a 1955 Young Adult Historical Fiction novel by Rosemary Sutcliff, the follow-up to her 1954 bestseller The Eagle of the Ninth.

An infant rescued from a Roman shipwreck is adopted by a British tribe beyond the frontier, but fifteen years later, they drive him back out again. Hoping for a warmer welcome from his “true” people in the Roman Empire, Beric is instead abducted by slavers and sold as a British barbarian in Rome. He makes an enemy of his master’s son, a friend of his daughter, and discovers a faint hope of refuge with an engineer from Britain – if first he can fight clear of the mines, the galleys, and the great storms.