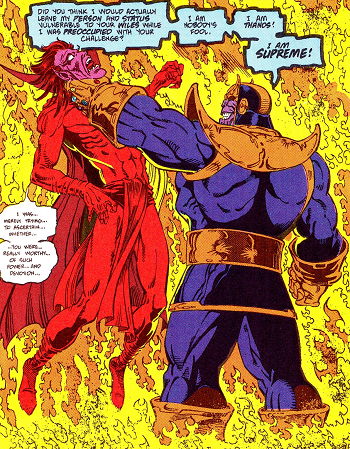 We don't expect Thanos is interested in any of your deals, Mephisto.
Jax: I'll never forgive you, Joker.
The Joker: Which of my crimes has your panties twisted?
Jax: Making Kano seem like less of a monster.
— Mortal Kombat 11
Advertisement:

In the Big Bad business, There Can Be Only One, and it had better not be you when I'm Eviler Than Thou.

Two villains are rivals, each wreaking havoc in their own special way. For instance, one is direct and violent, while the other is a cowardly but clever schemer, or one is selfish and the other is a Well-Intentioned Extremist. Each one has the potential to be the one and only Big Bad. The poor Heroes are caught in the middle between two completely different threats, and have to be flexible enough to stop both.

As the two villains plot, their Evil Plans will begin to collide and interfere with each other. If they meet, they will have the same reaction every time: the other villain is a disgrace to villainy's good name (or bad name, or... you know what we mean). The sneaky one thinks the violent one is a dumb brute, while the violent one thinks the sneaky one is pathetic. They may team up against the heroes for a while (each planning to double-cross the other), but usually they go for each other's throats, and the cross-fire threatens to destroy the world.

Whichever villain wins will rub it in with a cackling "The Reason You Suck" Speech about how the other villain is deficient. "People think you're scary, but deep down you're just a dumb thug." Or, "All your plotting and scheming has come to nothing when facing a real man who just fights." This is usually the end of the less horrible one. If they survive, they will often be so shocked at what the other one is planning that they team up with the heroes in an Enemy Mine. "I always thought I was doing right — this guy is just a selfish monster!" Or, "I only wanted to steal money, but his mad utopian schemes could doom the world!" They may or may not reform.

Often, the heroes (and the writers) will ponder at length which villain is worse morally, with An Aesop. Usually, the moral is about avoiding either of two extremes (for instance, pragmatic heroes dealing with a selfish villain and a fanatic villain).

Note that the victorious one doesn't necessarily have to be the more strictly evil of the two, just the more dangerous. It's entirely possible for the loser to be more twisted while simultaneously being weaker or otherwise less of a threat, and by extension less able to implement their evil as effectively.

Some villains collide, but some stories just have their contrasting plots pass each other by. Or one of the villains may be more of a comic-relief distraction from the more threatening one, which does not necessarily mean that the comic relief one is less evil.

See also Evil Versus Evil. May be part of an Evil Versus Oblivion or The Good, the Bad, and the Evil conflict. Anti Heroes (Unscrupulous or Nominal) and Anti Villains generally have another villain around who is eviler. Contrast Arson, Murder, and Admiration, Holier Than Thou, Lesser of Two Evils, More Hero than Thou, A Lighter Shade of Grey. The villain claiming to be Eviler than Thou is showing that sometimes it's not true that Even Evil Has Standards, while the villain they're claiming to be worse than (if it's true and the other villain proudly agrees) may be a straight example of Even Evil Has Standards. Also one of the defining traits of a Stupid Evil character (who is usually too idiotic or shortsighted to realize that they may have to work with someone again down the line and that betraying them tends to make this impossible); this is where the phrase "don't shit where you eat" tends to show up a lot, as villains with Chronic Backstabbing Disorder borne of this trope tend to have difficulty finding people who will work with them and will have to contend with a lot of other villains who want to kick their asses. In extreme cases it may lead to Body-Count Competition particularly between public enemies and serial killers who will treat the number of their victims as proportional to their criminal status.

Compare Make Way for the New Villains, when the bigger, eviler threat is a newly introduced character, and Hijacked by Ganon, when an older Big Bad usurps a newer one. See also Do Wrong, Right.

Apes Have Feelings Too

Mojo is heartbroken when the alien leader steals all his ideas, but the Powerpuff Girls fail to see his perspective and hear nothing but him yelling.

Apes Have Feelings Too

Mojo is heartbroken when the alien leader steals all his ideas, but the Powerpuff Girls fail to see his perspective and hear nothing but him yelling.