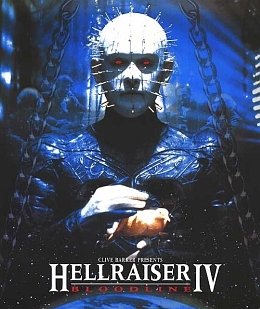 Fourth film in the Hellraiser franchise, the last one released theatrically, and final one to have any involvement from creator Clive Barker until the 2022 reboot.

It's the year 2127, and on the mysterious space station Minos, a man named Paul Merchant (Bruce Ramsay) has a robot fiddling with a very familiar-looking box. As the robot solves the cursed puzzle (and subsequently gets blown to smithereens), a group of guards storm into Merchant's station, placing him under arrest.

In captivity, Paul proceeds to detail the history his family has with the Lament Configuration and the Cenobites, as well as the plans he has for them aboard the space station.

To say that this film suffered from Executive Meddling would be an understatement. Several characters and plot points were left on the cutting room floor, and the movie was shoved into theaters. Barker cut ties with the film franchise afterwards.