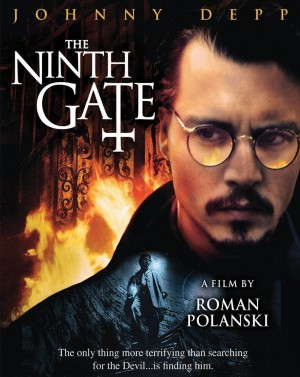 The only thing more terrifying than searching for The Devil...is finding him.
The Ninth Gate is a 1999 mystery thriller film by Roman Polański, freely adapted from the Spanish novel The Club Dumas by Arturo Pérez-Reverte, starring Johnny Depp as Dean Corso, an expert on rare books.
Advertisement:

Corso is hired by a collector, Boris Balkan (Frank Langella), to authenticate his copy of The Nine Gates of the Kingdom of Shadows. Written in 1666 by Aristide Torchia, the book is supposedly an adaptation of another book, the Delomelanicon, written by Lucifer himself, and it contains instructions on how to summon the Devil and gain great supernatural power. After Torchia was burned at the stake, only three copies of The Nines Gates survived to the modern day, but Balkan believes that only one is authentic and the other two are forgeries. He asks Corso to compare his copy to the other two and find out which is the real book.

The investigation causes Corso to cross paths with many other collectors, who like Balkan seems to genuinely believe the book has power and will do anything to learn its secrets. Initially disbelieving of the supernatural, the things Corso sees begin to change his mind, and he discovers a secret of The Nine Gates that could be the key to solving its riddles and achieving ultimate power.