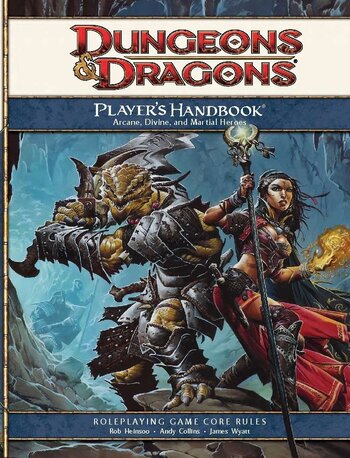 4th Edition changed a lot of the mechanics from the previous edition, making it easier for new players to get used to the basic D&D concepts. Its setting and rules are a lot less varied than 3.5 - there's no more crafting system, most magic and attacks are made into "powers" that vary by each class, and magic items have been slimmed down - and there's more pluses in the game rather than minuses (i.e. most races get two + 2 to abilities, rather than the usual 3.5 one of +2 to one, -2 to one). To this end, the game is more fitting (and clearly designed) for a heroic campaign that is combat-heavy and very fantasy-oriented, with very few guidelines on the role-playing portion.

Combat itself was highly revised so that each class is equally capable, but in different roles: Wizards have area-attack spells and debuffs, fighters draw attention and punish enemies who don't attack them, rangers do heavy damage with an assortment of multi-attack powers, etc., and all of these are presented in a standardized format to keep classes more or less balanced.

Dungeons & Dragons Essentials (4th) (2010 - 2014) was a new line of products that was launched in 2010, compatible with 4th Edition rules. Essentials had the stated intent of offering new players a means of introduction to the game. It is, for the most part, a simplified 4E. There are some differences (for example, fighters and thieves have scaling class features that modify their basic attacks, instead of special attack powers) but nevertheless uses all the same core mechanics from 4E. It's a set of ten products (the new Red Box, dice, three tile sets, and a few extra books).

The large changes that 4th Edition introduced made it incredibly controversial with D&D fans at the time. The main problems that scared fans away included concerns that it plays too much like a MMORPG and/or a tabletop miniatures war game rather than the more flexible fantasy game that it was in previous editions. Indeed, the assumption that players use miniatures on a map is even expressed throughout the core rules, such as movement being described in squares, not feet. Fans were also unhappy with large changes to the lore of several published settings that were released along with the new edition and the removal of the Open Game License which had previously allowed third party publishers to sell additional material for Dungeons & Dragons.

These factors led to many fans refusing to switch over from 3rd Edition, or to instead play the rival system Pathfinder.