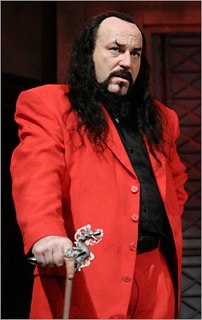 James Mitchell (born February 26, 1965) in Orlando, Florida) is a retired American Professional Wrestling manager best known for his work in WCW as James Vandenberg, in ECW as The Sinister Minister, and under his own name in TNA. He started in the Carolinas/Virginia independent scene before getting his first break in SMW as Daryl Van Horne as the manager of Prince Kharis, a wrestling Mummy. It flopped, but he stuck around to manage Kendo the Samurai and a few others. He debuted as Vandenberg at WCW Uncensored 97 as the manager of Mortis, the antagonist of Glacier in the Blood Runs Cold storyline. After the feud ended, he had a short-lived commentary segment on WCW Saturday Night called "The Odditorium" before it was scrapped. He found success in ECW managing Mikey Whipwreck and Yoshihiro Tajiri to the ECW World Tag Team Titles

near the end of the promotion's run. He arrived in TNA early on as "Father" James Mitchell, the leader of the New Church. His most famous work there was as the manager for Abyss, and later against him. He also used the Sinister Minister name in MLW in 2003 as the manager of Christopher Daniels, Whipwreck, and Jerry Lynn.