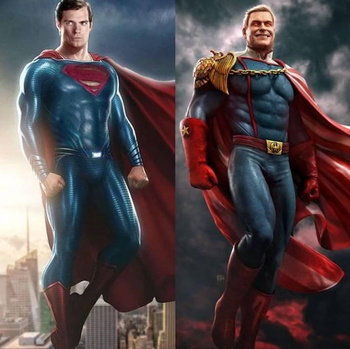 On the left, Superman; on the right, Homelander.
The Expy is a character modeled after another, given their own flair/original traits and altered to fit the story. Sometimes this is done out of appreciation for the character. But sometimes, the expy is meant to be a twisted, corrupted and nastier version of the original character. A Superman Substitute who's an insensitive Jerkass, for example.
Advertisement:

The Corrupted Character Copy exists as a twisted reflection of the original, usually to serve as a Deconstruction or Take That! against the original (although it can also be a product of the same respect and enthusiasm for the original as an Expy, if the writer simply thinks that a character would make for a fun and compelling villain). To wit, there are a few metrics to apply for a character to count:

To aid you in determining if a given character fits this trope, consult the following format guideline:

This template need not be followed specifically, but if it cannot be followed, the character in question probably does not count.

Related to, but distinct from, Evil Counterpart, with the difference being that the Evil Counterpart trope deals with an in-universe darker version of another character. A Sub-Trope of Alternate Company Equivalent, Captain Ersatz and Fountain of Expies. Compare Adaptational Jerkass and Adaptational Villainy, when the original character shows up as a meaner or more villainous incarnation of how they were originally written, and Adaptational Heroism and Adaptational Nice Guy, when a character is significantly nicer or more heroic in an adaptation than they are in their main work. This trope is most prevalent in Superhero fiction, with Superman himself being the most common target, thus Beware the Superman is very closely related. Examples that don't capture the character they're supposed to be "corrupting" very well may overlap with Shallow Parody. This may be one reason for Knocking the Knockoff; the character will likely find this twisted version of themselves horrifying or infuriating.

Under certain circumstances, this trope may involve spoilers.