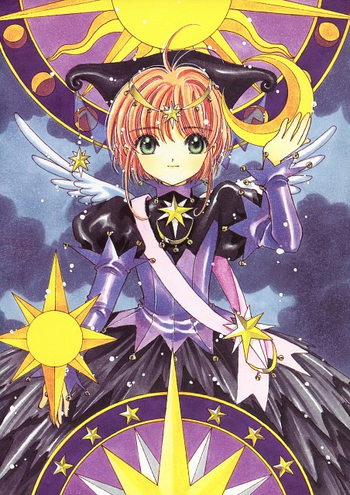 A falling star fell from your heart and landed in my eyes
I screamed aloud, as it tore through them, and now it's left me blind
The stars, the moon, they have all been blown out
You left me in the dark
No dawn, no day, I'm always in this twilight
In the shadow of your heart
— Florence + the Machine, "Cosmic Love"
Advertisement:

Space has fascinated humanity since time immemorial, and continues to feature as a theme or character motif to the present day. Characters and objects are given Cosmic Motifs to evoke the awe-inspiring mystery and nigh-infinite scope of space. Because Space Is Magic, there may also be power and mysticism involved as well.

Because many things in space are named for figures in Classical Mythology, this can easily double up with Mythical Motifs and Religious and Mythological Theme Naming. This can also go hand-in-hand with Stellar Name and Zodiac Motifs if the characters are named appropriately. See also Artistic License – Space for when liberties are taken with their attributes.