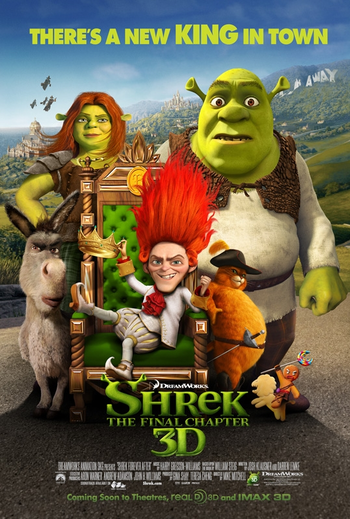 What the Shrek just happened?
"Sometimes I wish I had just one day to feel like a real ogre again."
— Shrek
Advertisement:

Shrek Forever After (also known as Shrek: The Final Chapter through promotional material) is the fourth and final installment of the Shrek tetralogy released in 2010 under DreamWorks Animation.

The story follows Shrek, married and now the father of three ogre children, who finds himself in a rut, longing for the days when he was a "real ogre". It just so happens that after angrily storming out of his own children's birthday party he gets just the opportunity he was looking for from the smooth-talking Rumpelstiltskin (Walt Dohrn). After he agrees to trade off one day from his childhood that he doesn't even remember in exchange for one day of romping and terrorizing in an alternate timeline supposedly free of consequence, Shrek realizes that Rumpelstiltskin took away the day that he was born. Now in order to restore things to the way they were, Shrek must team up with the alternate versions of his friends in order to share true love's kiss with his wife Fiona, who has become the leader of an ogre resistance against Rumpelstiltskin, who, as it turns out, was almost granted control over Far Far Away before Shrek rescued Fiona from her castle all those years ago.

Not to be confused with Shrek 4-D, a theme park attraction set after the events of the first film.

Shrek Forever After contains examples of:

With Donkey's help, Shrek learns the secret to breaking his contract with Rumplestiltskin and regaining his life.

With Donkey's help, Shrek learns the secret to breaking his contract with Rumplestiltskin and regaining his life.