Literature / The Arts of Dark and Light 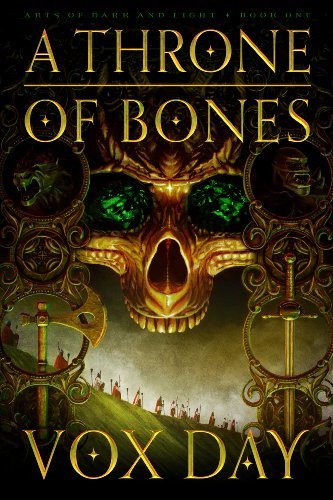 I don't object to the ugliness, hate, and perversion in A Song of Ice and Fire and other modern epic fantasies. Such things exist in all fallen worlds and must be included for the sake of verisimilitude in any work of sufficient seriousness and scope. Is there not ugliness, hate, and even perversion in the Bible? What I object to is the near-complete absence of beauty, love, and normalcy to oppose them.
— Vox Day, explaining

why he felt it necessary to write his own fantasy series as a "literary rebuke" to what he considers the current nihilistic trend in the genre
Advertisement:

The Arts of Dark and Light is an ongoing epic fantasy series by American expatriate author and political activist Theodore R. Beale, better known under his Pen Name Vox Day. Though it has its origins in older short stories, the first book in the series proper, A Throne of Bones, was published in 2012. It has been followed, so far, by one sequel and a collection of related works. The prequel short story "Opera Vita Aeterna" was a finalist for the Hugo Awards in 2014.

Set in the medieval fantasy world of Selenoth, the series initially follows what appears to be two unconnected main plotlines. The first concerns political struggles in the Church and Senate of the decaying Amorran Republic, told mainly from the points of view of members of the feuding Valerian and Severan noble houses; the second chronicles intrigues in the rising rival power of Savondir, as seen mostly by a princess from an outlying kingdom. At the same time, ominous prophecies, seemingly supernatural irruptions and savage hordes on the march in the North suggest greater threats than mere local unrest. Only gradually do the true stakes of the emergent conflict become apparent.

The Arts of Dark and Light is unusual in modern fantasy for presenting a world in which The Church is as much of a power as in the real medieval ages, temporally as well as spiritually. Thus, the actions of popes and prelates matter fully as much as those of dukes and kings, and even many villains do not wholly disregard the tenets of religion. At the same time, Selenoth is also a world where magic is very real, and Church theologians strain their intellectual resources trying to make sense of werewolves and immortal elves as part of the Lord's creation.

According to the author, the main storyline is ultimately projected to span five books. As of 2021, the series currently comprises the following volumes:

In 2021, Vox began adapting the story into a serialized weekly webcomic at his site, Arkhaven.

The whole thing can be read for free here

The Arts of Dark and Light contains examples of the following tropes: