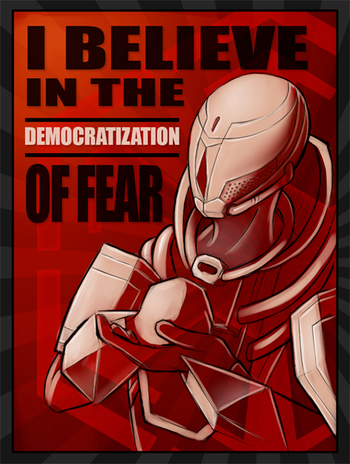 For the Empire!
Image

.
"Do you begin to see, then, what kind of world we are creating? It is the exact opposite of the stupid hedonistic Utopias that the old reformers imagined. A world of fear and treachery is torment, a world of trampling and being trampled upon, a world which will grow not less but more merciless as it refines itself. Progress in our world will be progress towards more pain. The old civilizations claimed that they were founded on love or justice. Ours is founded upon hatred. In our world there will be no emotions except fear, rage, triumph, and self-abasement. Everything else we shall destroy — everything."
— 1984
Advertisement:

The third, final, and most despicable trope in the unholy trinity of villainous objectives, Dystopia Justifies the Means is where the goal of the Big Bad is nothing less than the deliberate creation of a Dystopia, a land, planet, universe or multiverse of perpetual misery and suffering, or some other form of evil. The result can be a Crapsack World, Villain World, Hell on Earth, or some combination thereof.

The villains out to achieve this usually have flown well beyond the Moral Event Horizon long ago. Justified for villains Made of Evil, like The First in the Buffyverse, as they actually feed on the world's malice and misery. Most demon lords, eldritch abominations, gods of evil, evil cosmic entities, and villains defined by doing evil only for the sake of evil itself will probably pursue this goal.

This trope can occasionally overlap with Utopia Justifies the Means. Perhaps they are esoteric utopians who wish to make a world that is great for them or their kind, but nightmarish for everyone else — Blood Knights who want a Forever War, vampires who desire The Night That Never Ends, bigots who want to rule as a Master Race and relegate the rest to second-class citizens or worse etc. Other times, they see themselves as genuinely wanting the best for everybody, but they operate on Blue-and-Orange Morality or are Obliviously Evil, so the society they want to create will be terrible but they will be too stubborn to admit it or delusional to even see it — the Social Darwinist, Bomb Throwing Anarchist, and the Totalitarian Utilitarian represent different flavours of such thinking.

It can also overlap with Despotism Justifies the Means when the dystopia is not merely a side-effect or the result of incompetence or cowardice, but something the would-be despot sees as desirable and essential for truly maintaining ultimate power — they may be The Paranoiac and think that the most obedient population is one kept in perpetual fear, or they might be The Caligula or a Sadist and believe that the only real and meaningful kind of ultimate power is where they are free to rule as a tyrant and abuse and terrorize people however and whenever they wish. This can also cover those who actually profit from keeping the people in a state of misery, such as the ruler who uses Divide and Conquer or Anarcho-Tyranny to prevent themselves from being ousted, The Quisling who sells out their own countrymen to an evil foreign power, or a ruthless profiteer who turns either their own country or another (or both) into a business venture where resources, property and people are exploited and sold and run into the ground.

The purest variant, however, is one where the dystopia is the goal with no particular benefit to anyone, even the character who desires it. They may be a Straw Nihilist who thinks that a miserable and cynical world is the most brutally honest one, they might be a Misanthrope Supreme who wants everyone to suffer in revenge for some real or imagined slights, or they might be just be violent thugs who want To Create a Playground for Evil. Regardless, the type of villain pursuing Dystopia Justifies The Means will not be satisfied just with obtaining ultimate power; they will desire to use that power towards a particularly vile end — to remake the world into a place of suffering for its own sake, valuing it just as much, if not more than their own power.