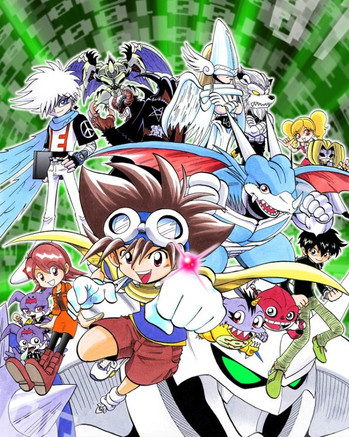 "My name is Taichi Yagami. I don't know why, but a few days ago, I found myself here in the Digimon World..."
Advertisement:

The first serialised manga in the Digimon franchise, and also the longest-running. Digimon V-Tamer 01 contains elements which feel like an alternate universe counterpart to Digimon Adventure, which actively based elements of itself (most prominently protagonist Taichi Yagami) on V-Tamer. However, it differs wildly from its anime counterpart in art style, plot, writing, mechanics, and the fact that there's only one hero and his Digimon, as opposed to the traditional chosen many. It's a pretty large case of Older Than They Think in many respects — it did a human antagonist before Digimon Adventure 02, and it portrayed Digimon as a Show Within a Show before Digimon Tamers did. Even today, one trait unique to it is that most plot relevant Digimon have personal names (technically, C'mon Digimon did this first, only two plot relevant monsters had names but they're only three total).

Our story starts with Taichi Yagami, an avid and experienced player of the popular-in-universe Digimon virtual pets. However, Taichi has a Digimon that nobody else has, and he isn't allowed into a V-Pet tournament because he is told that the Digimon in his V-Pet isn't recognized as a real Digimon. After the tournament is over, Taichi challenges the winner of the tournament, a boy named Neo Saiba, and their battle ends in a tie — something that is supposed to be impossible. Later, Taichi is summoned to the Digimon World, specifically a desert on the continent of Folder, by a being called Lord HolyAngemon, and there he meets the mysterious Digimon in his V-Pet, Zeromaru the V-Dramon (Zero for short). Taichi and Zero travel to Lord HolyAngemon's castle with the aid of Gabo the Gabumon, and there Lord HolyAngemon begs Taichi to find the five Tamer Tags and defeat the evil Demon, who has disrupted the peace of the Digimon World.

However, Demon has brought in a human tamer as well — none other than Neo Saiba, who feels insulted by merely tying with whom he considers a weak opponent. Demon gives Neo the task of raising the Digimon that will hatch from the Super Ultimate egg Demon is raising; Neo accepts, but with entirely different intentions, if no less sinister...

See also: C'mon Digimon, V-Tamer's functional Pilot Episode; and Digimon Next, the "other" Digimon manga which like V-Tamer also has loose ties to a vaguely concurrent anime series.