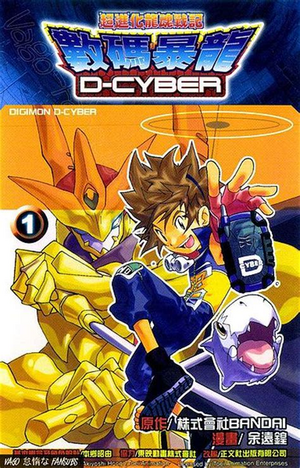 Digimon D-Cyber is a Chinese Digimon comic by Yu Yuen-Wong, released by Rightman Publishing Ltd in 2005. Before the events of the story the Digital World was ravaged by both an evil monster called Dexmon and a viral plague. The Royal Knights were able to seal Dexmon away in a prison known as the Digicore and Digimon were able to discover an x-antibody naturally occurring in some monsters that made them immune to the virus, allowing the population to vaccinate itself with it an survive. From there it follows the tale of four kids abducted by a MetalPhantomon who offers them power in exchange for their servitude, in hopes they can help him open up the Digicore and revive what is inside it.
Advertisement:

The plot moves pretty quickly, but unlike the similar Chronicle before it, D-cyber reads like a coherent narrative and not a random collection of events taken from the backs to different toy boxes.