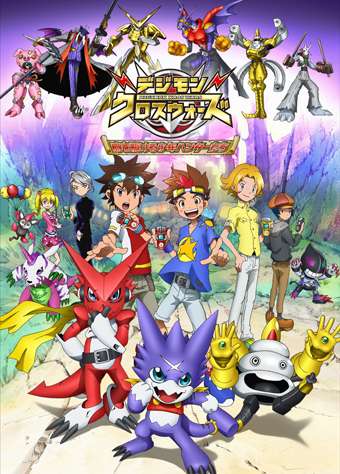 Digimon Xros Wars: The Young Hunters Who Leapt Through Time (pronounced "Cross Wars") is the third and final arc of Digimon Fusion (Xros Wars in Japan) and is not officially considered its own season* The creators consider it a third arc and not a standalone series, but rather a part of Digimon Fusion/Xros Wars. Its change of name is just a subtitle.

Set one year after the end of The Evil Death Generals and the Seven Kingdoms arc, Taiki Kudou and Yuu Amano have gone on to form the Xros Heart street basketball team; joining them is the incredibly eager Tagiru Akashi, who stumbles into the alternate dimension of DigiQuartz, a world between the Human and Digital Worlds. There, Tagiru meets his Digimon partner Gumdramon, as well as three adversaries: Ryouma Mogami, Airu Suzaki, and Ren Tobari, along with their Digimon partners Psychemon, Opossumon, and Dracumon. Shoutmon and Damemon return to fight alongside their old partners Taiki and Yuu. What is the secret of DigiQuartz, and what does it mean to be a "Digimon Hunter?"

The arc is different from other arcs in this season, in that there's much less focus on a plot; most episodes focus on Tagiru (and occasionally other characters) instead of just Taiki dealing with a Monster of the Week. However, there is a story running quietly in the background. The hunt right now is all fun and games, but it turns out that the DigiQuartz is spreading, endangering the rest of the world.

Early sources indicated that this was partially going to be a Milestone Celebration in the vein of Kamen Rider Decade and Kaizoku Sentai Gokaiger. The past leaders of each previous Digimon series, and some of the other characters, make cameo appearances in Episode 68 and return in Episode 76.

It's followed up by Digimon Universe: App Monsters.

This is a continuation of Xros Wars, so please use the official episode numbering used by Toei

in order to prevent confusion. Remember that this is an arc, not a season, so its episode numbering just continues from where the last arc left off.

Digimon Xros Wars: The Young Hunters Who Leapt Through Time contains examples of:

Considering Opossummon belongs to Airu, it kind of has to be cute

Considering Opossummon belongs to Airu, it kind of has to be cute