Taichi Yagami
"Sorry, but this isn't going to go according to your little scenario." 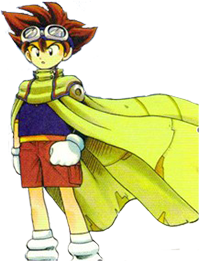 The hero, a V-Pet owner drawn into the Digimon World after being unable to participate in a V-Pet tournament. Once in the Digimon World, he meets V-dramon, his partner Digimon from that V-Pet.

Zeromaru
"I'll protect them all!" 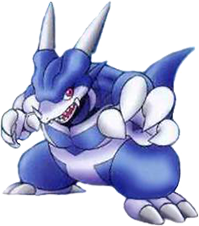 Taichi's partner Digimon, a V-dramon, often called just "Zero". Born from Taichi's Digital Monster Ver.1 virtual pet, he was an anomalous Digimon who wasn't supposed to exist in the devices (this didn't remain the case for long though) and so caused Taichi to be disqualified from the competition. He met Taichi shortly after he was drawn into the Digimon World, taking physical form there.

His evolved forms are as followsnote Note that as Zeromaru evolves, as with almost all Digimon in this manga, he stays in his new form permanently: 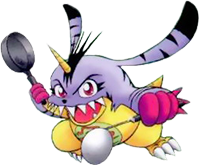 A Gabumon residing at Holy Angel Castle, he was the first to find Taichi and was subsequently tasked to serve as his guide and advisor.
Leo
"Don't overestimate yourself, brat!" 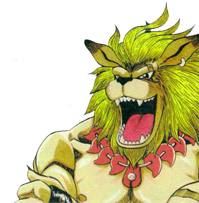 A Leomon who serves as the commander of Lord HolyAngemon's army. He is a hard taskmaster, but is wholly devoted to the protection of Holy Angel Castle and is kinder than he would like to let on.

Gekovitch
"Humans are all worthless!"

A TonosamaGekomon who worked for Lord HolyAngemon, and inadvertently tested Taichi and Zeromaru in combat for him.

"A disaster has befallen this continent…no, the entire world…" 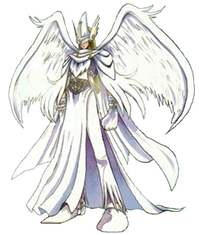 Lord Whamon
"If only I were a little younger, I could fight that Demon myself..."

The guardian of the Net Ocean, and the one who gave Taichi his Digivice 01.

A Gomamon living in the Net Ocean, who regularly braves the dangers of the Ocean to keep Lord Whamon informed of the events of the wider world.

Rei Saiba
"I was looking at my pc at home when suddenly the screen flashed." 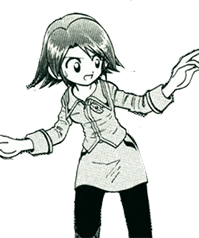 Pal and Pul
"It’s not easy having such a dumb brother."

A brother-and-sister duo of PetitMamon. They initially "served" Demon, but eventually became disillusioned with him and started following Rei around.

Lord Demon and his forces 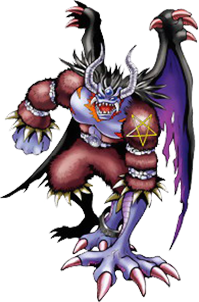 The antagonist, a power-hungry Demon Lord Digimon who seeks to conquer the world.

Etemonkey
"This should be interesting…but no matter how many weaklings you throw at me, I guarantee you’ll never win!!"

An Etemon serving as a subordinate of Demon, tasked with obstructing Taichi's quest for the V-Tamer Tags.

Lord Vamde
"There's no way they can get out of my illusionary hell!"

This subordinate of Etemonkey's was responsible for destroying a village and enslaving most of its population to make way for his castle. He was later assigned to guard the tag of illusions but was more concerned with tormenting Taichi and Zero than keeping it away from them. Despite this, he ended up being the longest lasting of the tag guardians, later joining the vanguard of Neo's first major offensive.

An arrogant tamer who first encountered Taichi in the V-Pet tournament at the beginning. He too was drawn into the Digimon World, this time by Demon, and serves him as the tamer of the "super ultimate" Digimon, Arkadimon. Before Arkadimon was born, Neo was the tamer of multiple Digimon, discarding those who lost in combat.
Arkadimon
"Gaa-aa-aa!" 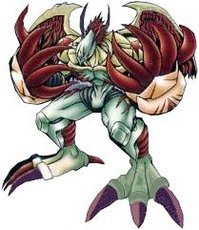 Neo's final partner Digimonin the Digimon World. The immensely powerful "super ultimate" Digimon which Demon selected Neo to raise. All of Arkadimon's evolved forms are named "Arkadimon", each appended with the level to indicate the difference. Its evolutions will ultimately end with an Eldritch Abomination, or so it is said. Neo has other plans.
MetalGreymon
"Fate didn't desert me."

The guardian of the Metal Empire Tamer Tag. Formerly a Greymon belonging to Neo, he was discarded and deleted after a lost battle, but pulled himself together, mechanised his body and evolved to MetalGreymon out of sheer determination to survive and prove his true worth to Neo. Neo, for his part, wasn't interested.

One of the first artificial Digimon created by Neo, born by merging a Grizzmon with a sample of the power data of Arkadimon. It was dispatched to apprehend Rei during her escape from Demon's castle, but was stopped by the arrival of Taichi and Zero.

Sigma
"Why would I talk with you?" 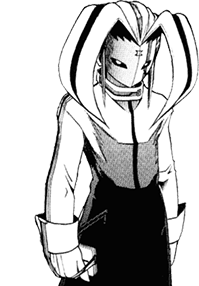 The "Alias I", a highly introverted masked boy who communicates solely through a vocalisation program on his computer, feeling this is the only way he can express himself. His partner Digimon is Piemon.inevitable victory.
Piemon
"Are you going to keep dodging forever?"

Mari Gotokuji
"Looks like the hero of the Digimon world isn't recognized here." 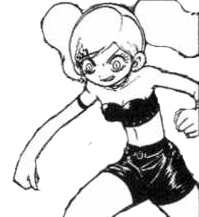 The "Alias II", a cold and sadistic girl who plays up a flighty bimboish facade to confuse her opponents. Her partner Digimon is Rosemon.
Rosemon
"If you can’t fly, you’re no better than a stupid dog."

"I thought these days would continue forever..."' 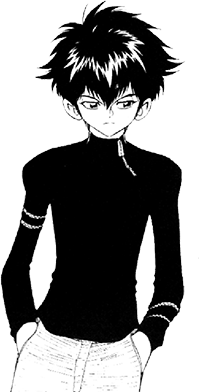 The "Alias III" of the Alias III, a trio of tamers convened by Neo to serve him. Hideto was a friend of Neo and Rei long before the events of the manga, and never quite got over Rei's accident. His two partner Digimon are Warg and Melga.
Warg and Melga

"If you have a plan then don't worry about me!"

Hideto's dual partner Digimon, a WarGreymon and MetalGarurumon respectively. They spend most of their time jogressed together into Omegamon, an immensely powerful holy knight Digimon.