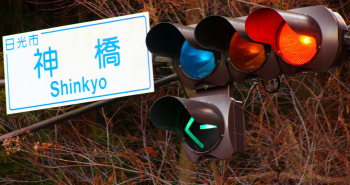 Yellow still means floor it.
"The strands in your eyes
That color them wonderful."
— Edwin McCain, "I'll Be"
Advertisement:

However, these color terms are not universal. Ask a Russian, and they might say that pink is just light red. They might also say that sky blue is a completely different color to ocean blue. In the Sinosphere

— the regions that either speak one of the Chinese languages (such as China, Singapore, Taiwan, etc.), or have languages that incorporate massive amounts of Chinese-derived extended vocabulary and have historically made widespread use of Chinese written characters (such as Japan, Korea and Vietnam), these regions traditionally have the same word for both blue and green

, indicated with the Chinese character 青 (or its simplified glyph 靑).note This character is read as reconstructed Middle Chinese tsheng, Mandarin qīng, Vietnamese thanh (poetic) or xanh (daily usage), Korean 청 cheong, indigenous Japanese あお ao, さお sao and しい shii, and Sino-Japanese せい sei and しょう shō. Most natural and traditional uses of both blue and green are represented by this word, including the color of the sea, the color of forests, etc. In more recent centuries, there has arisen a greater need to distinguish the concepts that English-speakers would understand as blue and green. The newer compound Chinese character 綠 (Japanese simplified: 緑, Chinese simplified: 绿) came to use in Chinese, Japanese and Korean to specifically mean green as opposed to blue.note This character is as reconstructed Middle Chinese ljowk, Mandarin jī, jí, lǜ and qī, Vietnamese lục, Korean 록 rok and 녹 nok, indigenous Japanese みどり midori, and Sino-Japanese りょく ryoku and ろく roku. Meanwhile, in China, the character 藍 (simplified: 蓝)note Mandarin: lán, initially used to refer to the indigo plant—as in the Xunzi quote "青、取之於藍，而青於藍／青、取之于蓝，而青于蓝" (lit. "blue [dye] is derived from the indigo plant, but is bluer [more vibrant/dark/pure] than the indigo plant", fig. "the student has Surpassed the Teacher", often simplified as the idiomatic phrase "青出於藍/青出于蓝"), has been implemented to phase out the ambiguous 青 as the definitive character for blue.

However, even today, these two terms are not universally distinguished as would be understood in English. For example, forests are still 青 (blue). Green eyes are also confusingly 青 — they were known to traditional Chinese civilization because there were ethnic groups on the periphery of their civilization (such as the Tocharian and Turkic peoples) who often had green eyes. And even green traffic lights are 青. But not all "natural" green things are 青 and not all "modern" green things are 綠 — for instance, gemstones such as jade and emeralds are 綠 (green). Perhaps most confusingly, even though forests and grass are 青 (blue), verdant flora is 綠 (green). In Cantonese, 青 usually refers to yellow-green or lime green more often than blue.

The Sinosphere is not the only place where languages often muddle the distinction between green and blue. This has also been observed in the modern Celtic languages (Irish, Welsh, etc.), where there is not only some muddling between green and blue, but also between those two and grey. South Slavic languages call blond hair blue; in this case, blue originally meant "fair", Similarly, older Italians lump orange in with red. Indeed, before about 1500, orange in virtually every European language, including English, was lumped in with either red (as with "red" hair, robin "redbreast"), or yellow/gold; the colour orange is actually named after the fruit, not vice versa. You can see this clearly in Spanish: the word for the fruit (naranja) is the root of the word for the color (anaranjado). Even in the Mediterranean, "blue" was historically not considered an individual color for centuries: texts like The Odyssey, for instance, describe the ocean as being the color of wine, which inevitably befuddles English-speakers used to associating that description with a dark reddish-purple.

One anthropological researcher had the idea of taking a green object and a blue object, and asking his test subjects "Are these two exactly the same color?" He had thought that the explanation for this trope was some kind of colorblindness. Naturally, however, they could see that they were different colors: of course the two objects are different shades of tscheng.

Recent advances in neuropsychological and archeological research suggest that the conception of colors in different civilizations depended on how reliably each civilization could produce dyes of that color on demand. In most cultures, the technology for manufacturing blue dyes was most difficult and came last and contributed to the conflation between blue and green. For more details, listen to this audio clip.

For further reading, see Guy Deutscher’s Through the Language Glass for an in-depth explanation of this trope and its equivalents in other countries.