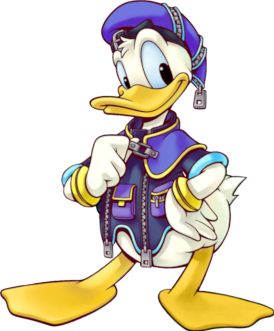 Donald Duck loads himself with zippers here, even on his Nice Hat.
"I wish I had more zippers... so I could tell you to ZIP IT."
— Neku Sakuraba, The World Ends with You
Advertisement:

Some costume designers are of the belief that Everything's Better With Zippers; if you add zippers to a character's outfit, then it makes them somehow intrinsically cooler. Even if the placement of said zippers makes no practical sense whatsoever.

This has become rather prevalent in Japanese popular media especially in the past decade or so, and may or may not have taken cues from the Goth fashion subculture. Certain other Western subcultures have crossover into this as well (e.g. bondage pants).

The cousin trope to this is Too Many Belts. Not to be confused with Zip Me Up which, while involving zippers, is about something else entirely. See also Chained by Fashion. The opposite of We Will Not Have Pockets in the Future. A subtrope of Useless Accessory.