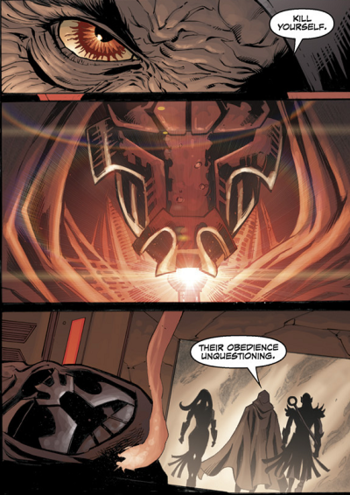 A key point is that the victim obeys of their own free will. If they don't have a choice, it's Psychic-Assisted Suicide. If they have a choice between suicide and something worse, see Suicidal Sadistic Choice. If the victim doesn't realize their action will kill them, see Tricked to Death.

A variant is the leader ordering their people to do something obviously suicidally dangerous but not directly deadly, such as stand between him and The Hero.

Subtrope of Murder by Suicide. Supertrope to Walk the Plank, a specific version of execution by suicide; Seppuku can also be one. A typical indirect way of achieving this while hypocritically disguising in wartime as duty is the all-time favourite Uriah Gambit.

Compare Please Kill Me If It Satisfies You, where it's the character volunteering to die, and Leave Behind a Pistol, for when they are allowed to kill themselves as a way out. Telling someone to kill themselves without having the authority to expect them to obey is a Suicide Dare, and can end in Driven to Suicide.

Roodaka demonstrates obedience to Vakama by ordering some Visorak to throw themselves off the edge.

Roodaka demonstrates obedience to Vakama by ordering some Visorak to throw themselves off the edge.