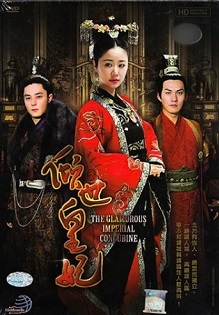 The Glamorous Imperial Concubine (倾世皇妃, Qīng Shì Huáng Fēi, also called Introduction of the Princess and Princess Dumping World) is a 2011 Chinese series starring Ruby Lin, Yan Yi Kuan and Wallace Huo. It's based on the novel of the same name by Murong Yin Er.

During the Five Dynasties and Ten Kingdoms period, Ma Fu Ya is a princess of Chu who's exiled after her uncle seizes the throne and kills the rest of her family. She becomes embroiled in battles and succession struggles when she meets Meng Qi You, prince of Shu, and Liu Lian Cheng, prince of Northern Han, and both of them fall in love with her.