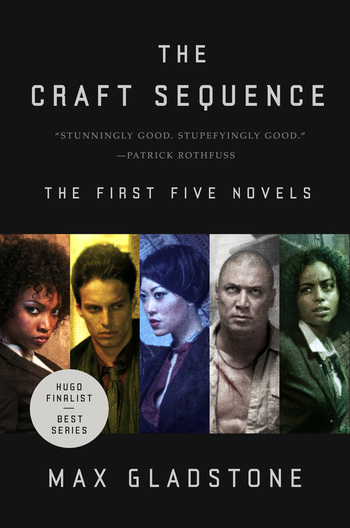 The Craft Sequence is a series of novels by Max Gladstone, set in a world analogous to the present day but run using Functional Magic in general and Magitek in particular.

The series is marked by characters who take an eminently practical attitude to some very freaky stuff: dead gods prompt intense legal wrangles, lich-kings run a surprisingly reasonable form of government, and implacable hive-minded things with no faces are damn fine cops.

The Craft Sequence is a series in which the world stays the same, but each features a different cast dealing with different events.

The author says the gods are metaphors for corporations (immortal, powerful inhuman entities) and the magicians for lawyers (drawing power from contracts, rare knowledge and dead languages). For example, resurrecting a dead god is bankruptcy restructuring. The books bring out the bizarre and fantastic aspects of our present-day existence. See this author interview

There are also two Gamebook-style games, hosted on Choice of Games:

See also Empress of Forever, an unrelated novel by Gladstone, which explores similar themes (parallels between myth/magic and technology, the balance of individual and collective power) from a sci-fi angle.