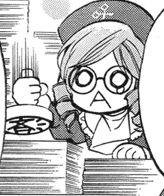 Head Inquisitor Dlanor in her daily routine.
"For all the talk of men coveting the Emperor's throne, Ivan had never heard of anyone speak of coveting his desk."
— Captain Vorpatril's Alliance
Advertisement:

Who didn't dream of one day becoming President of a country, executive of a big company, or leader of a big organisation? You can give orders, have a pretty life, and have the most important and spotlight-earning jobs! You can be a hero and a model!

And now that you have won the election, here is a pen and a stamp: warm up your arm, 'cause from now on you will use them a lot. Apparently, the main activity of people in charge is to spend their days with a desk and giant piles of paper as their only company. Of course it is Truth in Television to some extent (notably in law-related responsibilities), but naturally, in fiction it tends to be exaggerated to the point of torture. Expect some secretary to occasionally show up in the office with an additional pile, to the dismay of their boss. Usually Played for Laughs to show a less glamorous side of leadership. May be Played for Drama if the effect is to make the character wish they'd never sought or accepted the job in the first place.

Despite the title, it can apply not only to "Presidents" but also to any job involving some kind of important leadership.

Can be the reason for someone being Kicked Upstairs. May result in Trash of the Titans if disorder comes on top of quantity. Compare Vast Bureaucracy, Beleaguered Boss, Beleaguered Bureaucrat, Obstructive Bureaucrat and Corrupt Bureaucrat. May be a Badass Bureaucrat.