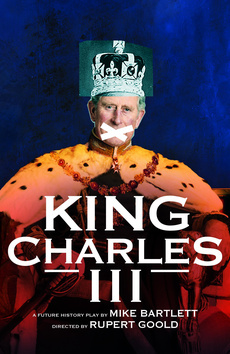 The Queen is dead.
Long live the king?
"Unlike you all, I'm born and raised to rule.
I do not choose, but like an Albion oak
I'm sown in British soil, and grown not for
Myself but reared with single purpose meant."
— King Charles, to Parliament, right before dissolving Parliament
Advertisement:

King Charles III is a play by Mike Bartlett. Premiering in 2014, the dialogue is notable for being written entirely in blank verse

iambic pentameter, leaning on the tradition of Shakespeare's history plays (it's even billed as a "future history"). The narrative follows the royal family through the three months between the death of Queen Elizabeth II and the coronation of the next in line for the throne: her son, King Charles III.

Eager to exercise his royal duties, Charles clashes almost immediately with Prime Minister Evans over a new bill for the statutory regulation of the press - the Prime Minister is for it, while the King wants the Parliament to reconsider what effects the bill will have on freedom of speech. Charles' refusal to sign the bill into law creates a schism between the elected officials of the government and the hereditary rule of the royal family which threatens to tear even the United Kingdom apart. Complicating matters are Prince Harry's budding relationship with an opinionated Republican and Prince William's bid to rehabilitate the House of Windsor's reputation at any cost.

Throughout the show the characters of Charles, Prince William, his wife Kate, and Prince Harry make asides to the audience about their roles in the royal family, the institution of monarchy, the legacy they'll be leaving for future generations, and the nature of government. All must choose how they wish to see the traditions of the monarchy continued in the British Isles, and then convince the others that their course of action is the best.

Note, the real-life Elizabeth II was alive and well at the age of 88 when the play premiered in 2014, and lived a further 8 years until her death in 2022. Due to Time Marches On, the play has become somewhat Outdated by Canon.