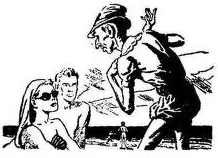 From left to right; Bayta, Toran, and Magnifico
THE MULE Less is known of "The Mule" than of any character of comparable significance to Galactic history. His real name is unknown; his early life mere conjecture. Even the period of his greatest renown is known to us chiefly through the eyes of his antagonists and, principally, through those of a young bride…
— ENCYCLOPEDIA GALACTICA, 116th edition, published in 1020 F.E.
Advertisement:

First published in two parts as "The Mule" in Astounding Science Fiction (November and December 1945 issues), by Isaac Asimov. This Science Fiction Novella takes place after the events of "The General (Foundation)" and in 1996, it earned first place in the 1946 Retroactive Hugo Award for Novels. A Mutant with Psychic Powers takes control of Kalgan, and from there, the biggest storyline in The Foundation Trilogy begins.

Toran, a common merchant at the edge of Foundation space, has recently married Bayta Darell, who is a descendant of the famous Hober Mallow. He's taking her home to Haven II to meet his family. They talk about politics, and Bayta explains why she thinks that the Seldon Plan expects another Crisis moment within a few years. The edge of the Foundation traders have expanded a great distance, but they pay too much in taxes. On Terminus, at the central government, the office of the Head of State has calcified into a hereditary position due to the Indbur family taking power and ending democratic elections. Bayta says that Hari Seldon didn't plan for just any new Empire, he planned to improve upon the galactic bureaucracy that had stalled humanity's growth.

Excited by Bayta's speechmaking, her in-laws tell her about the Independent Traders they've been organizing, and their plan to trick a would-be Galactic Conqueror into attacking the Foundation as prelude to a civil war against the authoritarian government. Bayta and Toren agree to visit Kalgan to find the Mule; a warlord who has already taken the Pleasure Planet from another galactic warlord. Their pretense is a honeymoon, and while they're on the beach, a strange and misshapen little man is wandering around. Bayta feels compassion for him, and he tells them that he is Magnifico Giganticus, the Mule's jester, fleeing from the court of a monster.

Not to be mistaken for the 2018 film produced and directed by Clint Eastwood. In 1952, "The Mule" was revised and included as the second half of Foundation and Empire.

"The Mule" provides examples of: