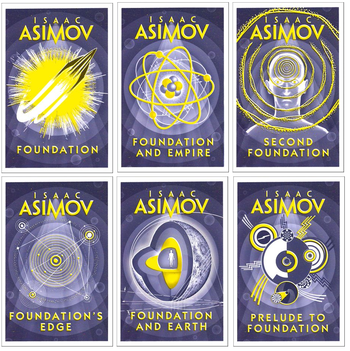 Foundation is a Science Fiction series that began in Astounding Science Fiction (May 1942 issue), and was created by Isaac Asimov. It is Inspired by… Edward Gibbon's The Decline And Fall Of The Roman Empire, describing a galactic-scale version of The Roman Empire. The original Novelettes all take place during the decline/collapse of a fictional Galactic Empire. This Epic Narrative was Dr Asimov's first attempt at creating a consistent universe, and it grew to encompass the largest fraction of his fictional work.

The Foundation Trilogy was published in the 1950s, at a time when he was also writing/republishing what would become the earliest events in the timeline of The 'Verse; his Positronic Robot series and followed by his The Empire Novels trilogy. He wrote Sequel novels to the ‘’Trilogy’’, featuring Golan Trevize and companions, and set halfway through the thousand year plan constructed by Hari Seldon. note The stand-alone story The End of Eternity is referenced in the Foundation's Edge novel to explain why there aren't any non-human civilizations in the galaxy. The Prequel novels cover the time period of Hari Seldon, just before the events of the ‘’Trilogy’’, with him as The Protagonist. Both prequels and sequels were published in the 1980s and later.

Dr Asimov allowed a few authors to write in his world, due to an Anthology that Martin H. Greenberg organized. After his death in 1992, additional authors were given permission by his estate to write stories within this universe, which continues to expand this literary franchise. Authorized adaptations into other mediums can be found on Foundation. Not to be mistaken for "Foundation" by China Miéville, which can be found in the anthology, Looking for Jake and Other Stories, or "Foundation" by Ann Aguirre, part of her Razorland Trilogy.

A TV series developed by Apple TV+, was released on September 24, 2021. A number of characters have been conserably re-tooled - Gaal Dornick and Salvor Hardin are now women, and Hardin is around for the founding. The emperor is now a clone family. Two trailers have been released before the series itself: a teaser trailer

and a regular trailer

Works in the Foundation series, in publication order:

The decline and fall of the First Galactic Empire provides examples of: