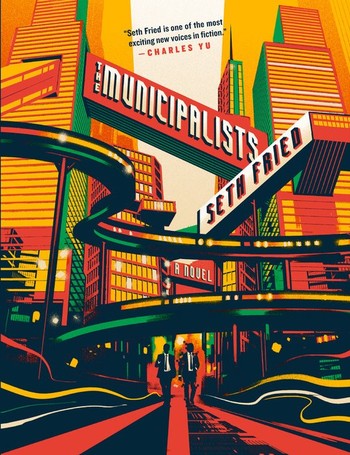 A comic-thriller from author Seth Fried, The Municipalists recounts the adventures of a neurotic, rule-following bureaucrat and his irreverent, freewheeling AI partner as they attempt to save the gleaming city of Metropolis from an unprecedented terrorist plot that threatens the American way of life.

Henry Thompson has dedicated his life to improving America's infrastructure as a proud employee of the United States Municipal Survey's Suitland Office. So when the agency comes under attack from a mysterious terrorist organization that seems to have suspicious knowledge of the USMS's inner workings, he dutifully accepts an unexpected mission to visit the insular Metropolis branch of the USMS to look for answers. But Henry's plans to investigate the Metropolis branch quietly, quickly, and carefully are totally derailed by his new partner: a day-drinking know-it-all AI named OWEN, who just so happens to be the digitally projected embodiment of the USMS's state-of-the-art supercomputer.

Personality clashes with his partner aside, Metropolis proves to be more treacherous than either Henry or OWEN could have predicted. Metropolis is the biggest, busiest, and most beautiful urban agglomeration in America, but the gleaming city hides a web of dark secrets and deadly traps. Danger lurks around every corner, and clandestine plots that involve everyone (from top personnel in the USMS to Mayor Laury's beloved daughter) are afoot. Henry and OWEN find themselves fighting to save not only their own lives and those of the city's 35 million inhabitants, but also the soul of Metropolis itself.

Some spoilers below are unmarked.

Tropes Appearing in The Municipalists: