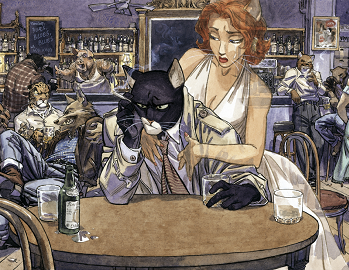 "Somewhere out there is a man who committed two murders: one of them was a woman, the other one my memory of her."
"Why has she killed herself? The movie does not supply that sensible question with an answer, and so I will supply one: Katie Chandler killed herself so that she could be cremated and her ashes could be used as a prop in this movie."
— Roger Ebert on Stealing Home (1988)
Advertisement:

A character, dead from the start of a work or killed very early, who is either depicted as The Ghost (not literally) or developed entirely via flashbacks.

This may sometimes make heavy use of Posthumous Narration. Devices such as Video Wills, Apocalyptic Logs, Troubled Backstory Flashbacks and suicide notes may also help, as may other characters discussing what he or she was like. In some cases, a deceased character may retain some narrative presence by appearing as a ghost or in the Afterlife. Time Travel also has a tendency to blur these sorts of lines.

Expect them to appear in a Happier Home Movie, which the protagonist will watch over and over until he realizes It's All Junk.

The Lost Lenore is often such a character. Undead characters and spirits don't count: the effect should be that, despite a character being dead and absent from the present, they still have as large a part in what's going on as the rest of the characters. At the very least, the viewer should get to know the character surprisingly well despite not being physically present.

Generally this character's demise is a Plot-Triggering Death. Compare with Dead Star Walking, Dead All Along, and Dead to Begin With. Contrast with Forgotten Fallen Friend. See also Death by Origin Story, which can sometimes overlap, if the origin story is a flashback. The Predecessor Villain is often a specific type of Posthumous Character. Greater-Scope Villain can be a villain version of this trope, depending on how it's used. Starts with Their Funeral can lead to this trope if the dead character is shown in flashbacks. An Impersonation-Exclusive Character will often be one of these.

Alternative Title(s): Dead From The Start