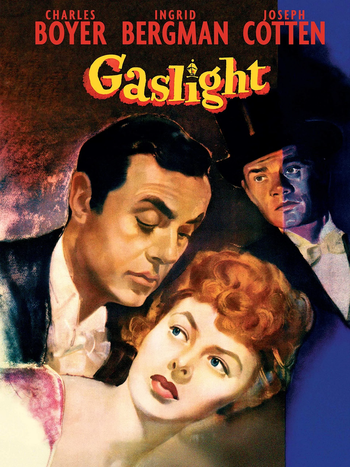 "If I were not mad, I could have helped you. Whatever you had done, I could have pitied and protected you. But because I am mad, I hate you. Because I am mad, I have betrayed you. And because I'm mad, I'm rejoicing in my heart, without a shred of pity, without a shred of regret, watching you go with glory in my heart!"
— Paula Alquist denouncing her husband
Advertisement:

Based on Patrick Hamilton's 1938 play Angel Street, Gaslight is a 1944 Psychological Thriller directed by George Cukor and staring Ingrid Bergman in her first Oscar-winning performance.

She plays Paula, a young girl who lived with her aunt, a famous opera singer. One day, the aunt is suddenly murdered and robbed by the mysterious Sergius Bauer, leaving Paula alone. After studying abroad for the ten years since the incident, she returns to England with a new husband, Gregory (Charles Boyer). But shortly afterwards, Gregory suddenly starts going out of his way to Mind Rape Paula.

Can Paula find out the reason for her husband's cruelty? Can a sympathetic Scotland Yard officer (Joseph Cotten) save the day?

A very-young Angela Lansbury made her film debut as the quirky maid Nancy; the performance won her an Academy Award nomination for Best Supporting Actress. The film is notable for coining the term Gaslighting, a form of psychological abuse of which the film's plot is an example.