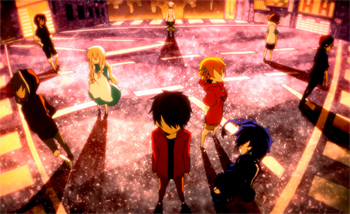 The Mekakushi Dan.
The Kagerou Project is a series of Vocaloid songs by producer Jin (Shizen no teki-P), with character designs by artists Sidu and Wannyanpuu. Each song in the series is connected to each other to tell a story centering on a group of people with special abilities that are born from their eyes.
Advertisement:

There is also a novel series written by the producer himself, which comes together with the songs and information released by Jin to tell the complex plot behind a town that seems to be hiding more than it appears.

A 13 volume manga was also serialized on Monthly Comic Gene illustrated by Mahiro Sato, and as per the announcement in the Children Record booklet, an anime produced by Studio SHAFT under the title Mekakucity Actors began airing on April 12, 2014. A short anime movie for the franchise premiered in theaters in winter of 2016, titled X4D Kagerou Daze -in a days-. Another animation project, titled Mekakucity Reload, was announced in 2017.

If you're interested, there are more in-depth guides to the series here

Seeing as the series is spread across different media, there are separate pages for the music, anime and the novel. Please put tropes specifically referring to those under their respective pages.