Film / Dawn of the Planet of the Apes 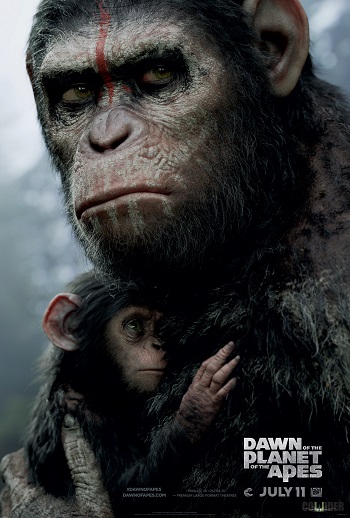 A decade after the Simian Flu wiped out most of humanity, the survivors have tried to hold out and rebuild society. Caesar now leads a community of thousands of apes who hunt, ride horses, wield heavy weaponry, and mostly avoid contact with humans. The peace isn't indefinite, however; Dreyfus, the leader of the human community near Caesar's, wants to leave the apes alone but has to restore electric power for the human community via a hydroelectric dam smack dab in the apes' territory. Wide-Eyed Idealist Malcolm, his family, and one of his friends reach out to Caesar to restore the dam and form a strong bond with them, especially Caesar's new family. However, with mounting pressure from Koba whose distrust of humans reached its fever peak, both sides could lose everything...

The film received a novelization; a prequel novel, Dawn of the Planet of the Apes: Firestorm; a prequel comic mini-series; and a one-shot comic, Contagion. Downloadable Content revolving around the Simian Flu was released for Plague Inc. in 2014 to promote the upcoming film.

Confident in this film, 20th Century Fox fast-tracked a sequel, and War for the Planet of the Apes, again directed by Reeves, released July 14th, 2017.

Dawn of the Planet of the Apes provides examples of: