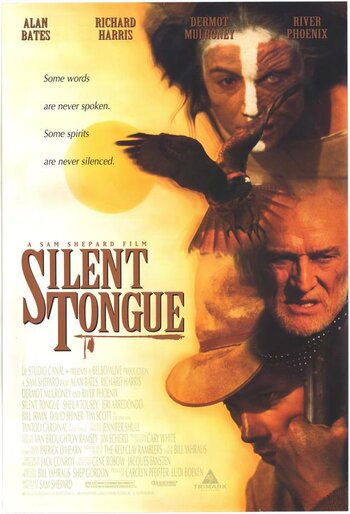 Silent Tongue is a 1993 American Western horror film written and directed by Sam Shepard and and featuring Richard Harris, Sheila Tousey, Alan Bates, Dermot Mulroney and River Phoenix. This was the last film to be released featuring a performance by River Phoenix.

Silent Tongue (Tantoo Cardinal) is a mute Kiowa who is raped by Eamon McCree (Bates), the owner of the Kickapoo Traveling Medicine Show. Eamon attempts to make up for his crime by marrying her, hoping for forgiveness. Instead, Silent Tongue enacts a bitter retribution through her two daughters, Awbonnie (Tousey) and Velada (Jeri Arredondo). Awbonnie, as the film begins, has already died, but her grieving husband Talbot (Phoenix) refuses to let her go, dragging around her corpse. To assuage Talbot, his father Prescott (Harris) sets out to purchase Velada from Eamon, thinking that only Awbonnie's sister can replace her in Talbot's eyes. But Velada's half-brother Reeves (Mulroney) protests the attempted transaction. As a result, Prescott kidnaps Velada and flees, with not only Reeves and Eamon chasing him, but also Awbonnie's ghost.