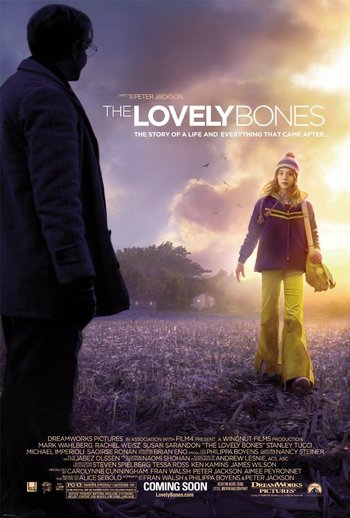 The Lovely Bones is the 2009 film adaptation of the novel of the same name by Peter Jackson. It stars Saoirse Ronan, Mark Wahlberg, Rachel Weisz, Stanley Tucci, and Susan Sarandon.

In 1973, life is kind to Susie Salmon, a sweet and helpful 14-year-old high school freshman who dreams of becoming a photographer. One day though, she runs into her creepy neighbor, George Harvey, who coaxes her into an underground "kid's hideout" he has built. Inside, Susie grows uncomfortable and attempts to leave. Harvey grabs her and the scene fades until she is seen rushing past her alarmed classmate Ruth Connors, seemingly fleeing Harvey's den, only to discover that she's actually in the afterlife...

After seeing the bloody bathroom and her bracelet hanging on the sink faucet, Susie realizes she never escaped the underground den and Harvey murdered her. While watching over her family and the way they deal with grief over her missing body as well as Ruth and her burgeoning love story with the boy she never got to kiss, Susie meets other victims of Harvey in the afterlife, which can morph into a happy paradise as she wishes.

Tropes specific to the movie go here. For the book, see its dedicated page.

The film specifically provides examples of: