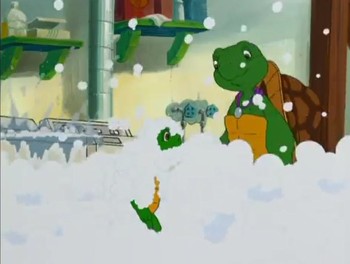 Alice doesn't know how to do the house chores; maybe she's The Lad-ette and as you know, only Feminine Women Can Cook. Bob can't either, he may not be used to it because Men Can't Keep House.

Or it's because they're kids or rich persons and have to experience it for the first time. Or they're clumsy, or very unlucky, and everything they do ends up in a disaster, usually. A third possibility is they were simply distracted (for instance by a phone call).

Whatever the reason, the kitchen is now a mess: dinner is burned to ashes, the oven caught fire (often because of Oven Logic), and cutlery put in the microwave made the latter explode.

It's not better in the laundry room: too much powder was put in the washing machine, resulting in a room looking like a pool of bubbles. Clothes have shrunk, and if not, their colors have changed (white laundry is now tinted with other clothes colors). And let's not talk about the iron, left for too long on a cloth, tearing a giant hole in it.

Domestic disasters can be used as an Establishing Character Moment, to show the chronic bad luck, distraction or clumsiness of a character.

Doomed New Clothes tend to particularly attract the problems tied to the laundry disasters; notably prom or wedding dresses. Add extra points when the dress is damaged only a few moments before it shall be put on, and with no replacement possible.

More rarely, the trope can be applied voluntarily, with revenge in mind. For instance an Alpha Bitch or an aloof big sister will get rid of her rival by ruining her (often expensive) dress.

Pretty much an Undead Horse Trope thanks to modern safety standards, but these were once frequent accidents until technology marched on. However, to preserve the comedic effect, the trope is still in use, even in works set in the modern day.

Often related to Men Can't Keep House, Too Incompetent to Operate a Blanket, Doomed New Clothes, Oven Logic, and tends to happen during A Day in Her Apron. Compare D.I.Y. Disaster, where it's not normal operation but repair that confounds the character. See also Electrified Bathtub for a lethal version.