For the Pirates of the Caribbean film, go here. 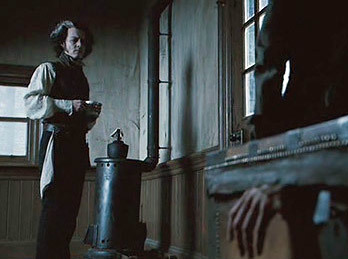 What do you do if you have a dead body on your hands and somebody snooping around whom you don't want to see it? Why, stuff it into a convenient empty chest or trunk until that busybody goes away, of course. This is only a temporary solution and you will still have to move the body later, but what could possibly go wrong?

This trope comes in two versions: dramatic and comedic:

Named for the real, original Dead Man's Chest, which was the name of one of the Virgin Islands.

Note that the chest in the song "Fifteen men on a dead man's chest" was probably the equivalent of his footlocker. If the hiding place is someplace a lot odder than a footlocker, that's Body in a Breadbox. For other ways to conceal a body inside something, see Carpet-Rolled Corpse and Cramming the Coffin. Can also overlap with Punk in the Trunk if the trunk of a car is used.